Anybody who ever read this blog knows I am a little bit obsessed with cardboard toys. This tiny obsession of mine seems to have been passed on to my son(s). That, and re-creating the obvious:)
I first met Villa Carton through their flip dolls and I soon realized majority of their products is actually made of cardboard.Imagine my luck when they asked me to review their City blocks. Also try to imagine P. when we were handed over the big package by the postman. His question: Mommy, is this something for me to play with so you can write it on your blog? was precious…as his face as I tried to take photos. 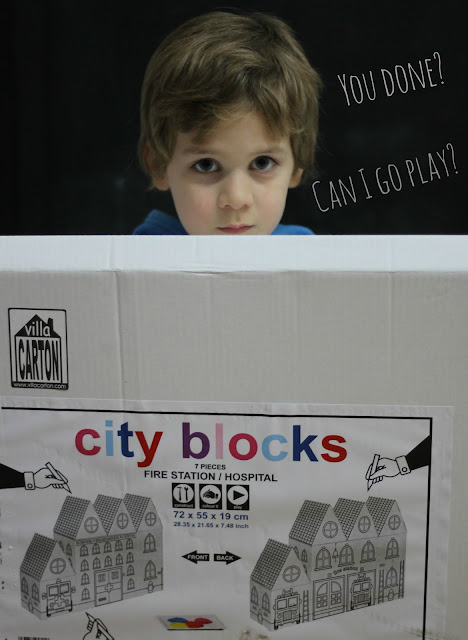 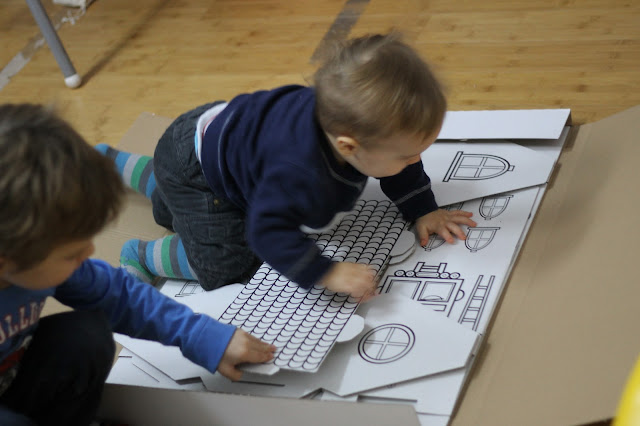 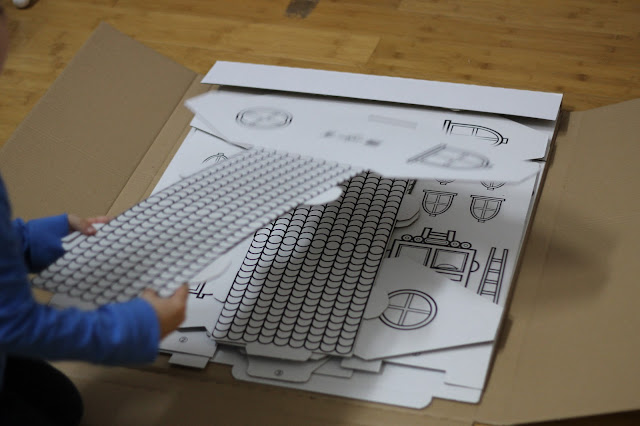 Set we received has a Hospital design on one side and a Fire Station design on the other. It contains seven blocks with a print on most sides. What I lover the most is that these blocks are actually boxes. Not boxy blocks! They are made like boxes that can be opened and closed whenever you want, without ruining the toy. 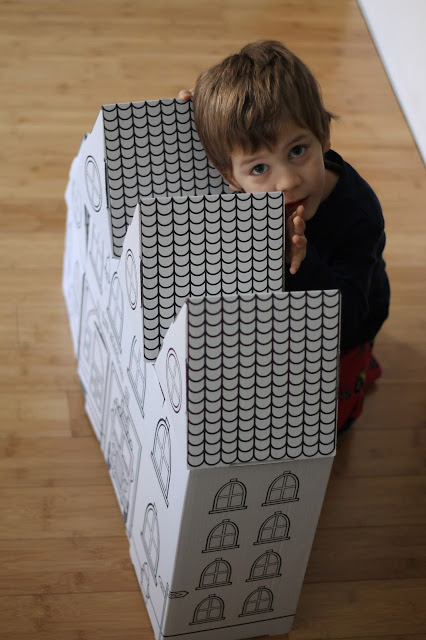 And just when I was happily plotting how this is totally cool, because I can also use it to store their smaller toys we are always stepping on, P decided he had a much better idea and asked me to cut out the doors on both sides of the biggest block, so he could park his cars inside. 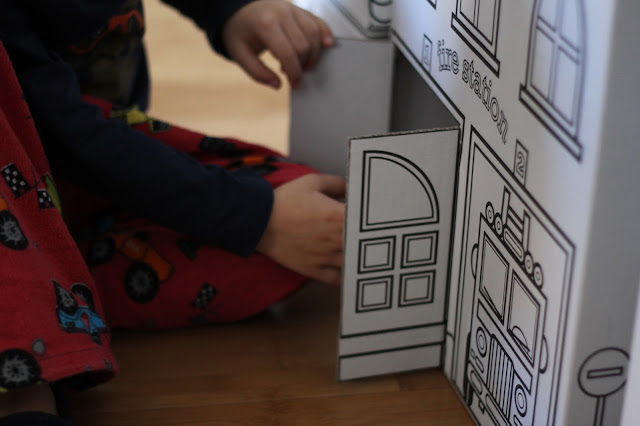 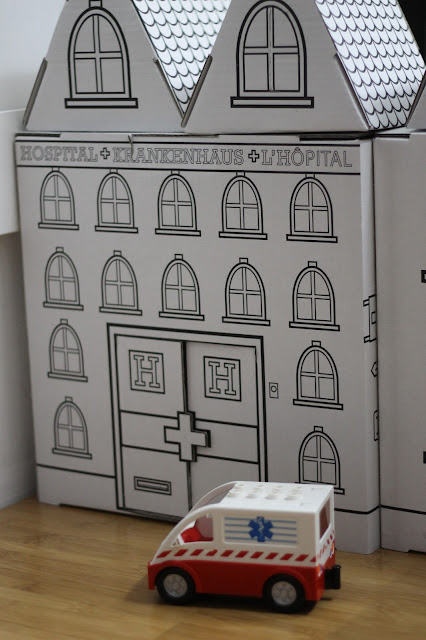 First I was reluctant to do it, after all, we just got it…no sense in ruining it immediately, but when he patiently explained to me how it should be done and along which lines I should cut, I just had no argument left. And he was right! I mean, this is what this toy is all about. You can use it as is, but there are numerous possibilities for kiddos to practice their creativity.

They can, for example, color it green… 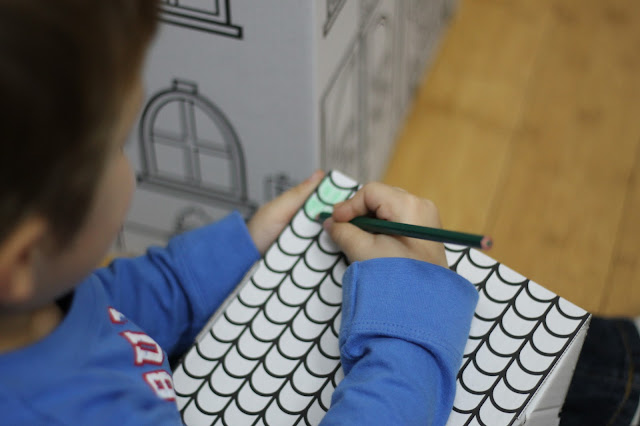 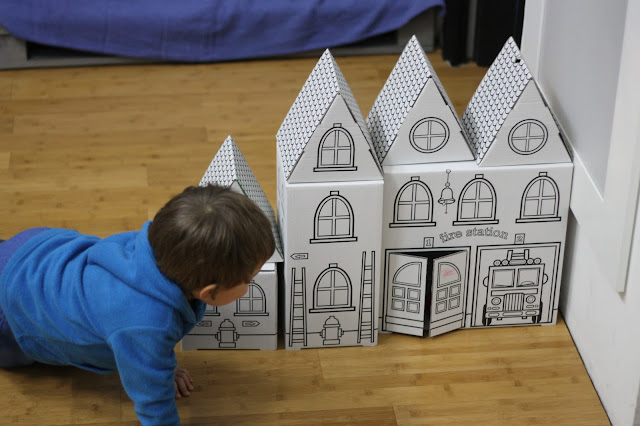 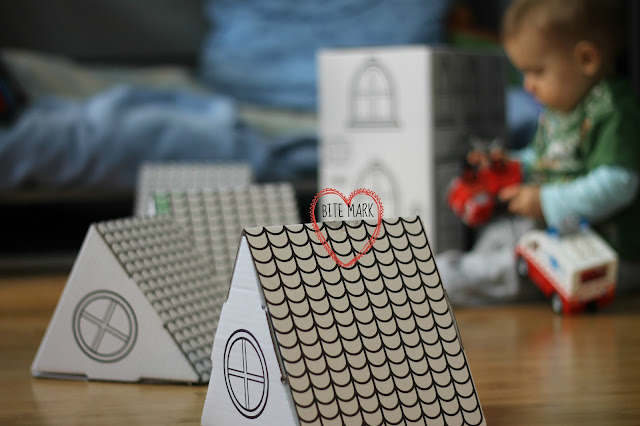 To be honest, I was worried how it will work with curious baby boy around, I was afraid he will ruin it in no time, but these blocks are sturdy enough for some baby roughing it around (he even sat on it several times). Baby test passed too:)
All in all, I think this is a perfect cardboard toy. I love the design, it is super practical because you can use it as storage as well as just fold it back flat when they get bored and put it away for a while since it is constructed that way. I personally love them monochrome but I can imagine how much fun it could be for bigger kids to personalize them. City blocks are also available as City/Shops and Western/Farm pairs and you can buy them here.

To read more about Villa Carton, check out this interview.

Thanks for having us test this super cool toy!